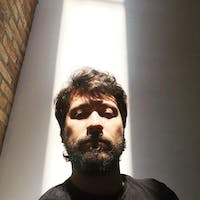 This is just another Monday morning at Heaven Tech.

Well, actually, this is the very first morning at Heaven Tech and, of course, the first one in the entire history of the Universe.

But let’s stop rambling and get to the point, because we have a disruptive purpose ahead: a new world to create.

Heaven Tech kicks off as a one-man show: God gets down to the office and sits at the desk.

“What have we got for today?”, God thinks.

Of course our Lord starts by making coffee (or should I say ‘creating coffee’?). After all, how on Aether can someone develop an entire Universe without a decent caffeine boost beforehand?

No chat requests. No meetings. No interruptions.

Yes, the perfect working environment: not a single urgent thing to do and 100% focus on Universe development.

Every inanimate object, plant and animal came to life in pure joy, relishing all things as they were created.

There were of course some minor issues, such as tameless volcanoes and unexpected meteors hitting the planet once in a while. But all of those were carefully dealt with by our World Designer, i.e.: beautifully designed ‘404 Not Found’ or ‘500 Internal Server Error’ pages.

So the worldbuilding continued.

Imagination was running free, inspiration was flowing and anything seemed possible in that unique moment.

God was a divine developer, and he was in the zone.

By the end of the fifth day, all systems were running smooth. But then..

On the sixth day

-“We have validation! To infinity and beyond! The sky's the limit!” (wait, was the sky the limit? Sorry, we don’t have time to get metaphysical now. This is the Engineering Department, not the Humanities)

-“I can’t believe this Adam guy actually paid for this!” laughed some of God’s first coworkers.

(At this point, I don’t know if implying the Almighty had coworkers will come out a bit inaccurate. But let’s carry on)

Soon after the first customer, the gates to heaven were open: the second came in.

But as all good things come to an end, later that day the first crisis took place.

(Wait, wasn’t it supposed to be a snake?)

Well, from what we know it was something about a big red juicy button that could not be clicked and crashed everything.

-“But if the button was there, why couldn’t we click it?” asked the customers.

-“Well, it’s complicated” replied the developers. “But anyway, we’ll take a look and get back to you.”

Now calm down. No biggie.

The CEO started this business with eons of expertise in the field (you might be wondering what happened with the other startups God had founded some ages ago, but maybe we can talk about that some other time).

In no time, the Almighty took a step back from the artist role and became our Customer Support Hero.

The bug was soon identified, quickly solved and everything became plain green on the screen again.

It may be true that Adam and Eve data disappeared, but what mattered is that the user interface was back and that new customers were coming aboard.

On the seventh day, God tried to rest

Happy endings may be rare, but sometimes there is no ending at all.

The problem solved the day before had been just a prelude to the root cause: a growing customer base without training, orientations or user manual whatsoever.

Customers were not satisfied and they tried to make themselves heard either by praying or making a fuss.

As usual in tech, many of these issues had not been anticipated in the planning stage.

So now we’re left with a heroic small team trying to deal with angry customers and a (literally) infinite backlog.

We are just at the beginning of the 21st century, but it must be already clear by now that we still don’t have a solution.

Thousands of issues come up every second all over the globe.

And even if sometimes it feels like things are getting better, every new year seems like evidence that many of our bugs can already be declared features.

But come on, let’s take it easy.

Every project has its flaws and we’re working in a risky and disruptive environment.

As long as we have billions of single daily visitors, investments will keep flowing and we won’t have to think about making ends meet.

So let’s just have a drink and celebrate, shall we?

Photo by Jeremy Bishop on Unsplash